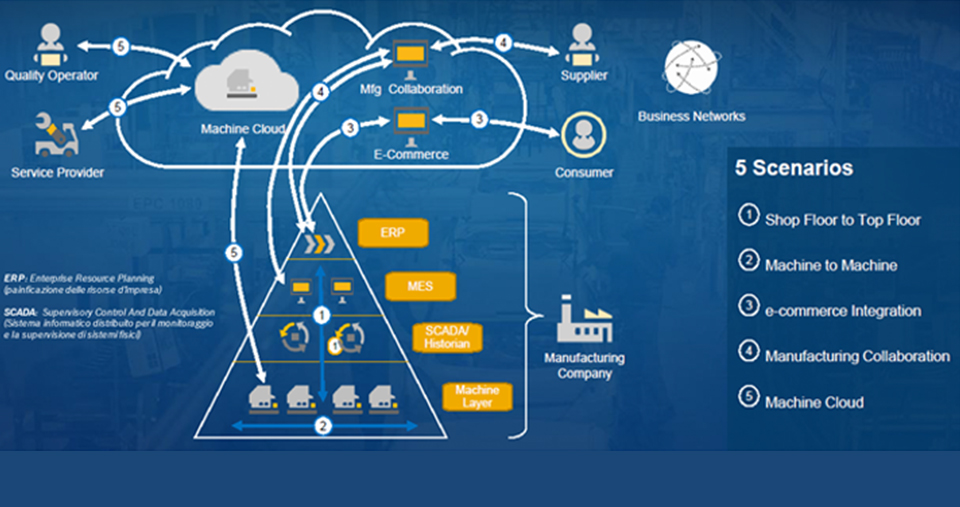 Society often moves according so called “Megatrends”, people often act following so called “trend setters”.
Is this enough to define Industry 4.0 and push also industrial and academic actors to move forward?
The technical evolution and the business revolution are both key pivot of this (digital) high speed rotating gear.
Business revolution is based on a new brick, less concrete, more flexible and valuable: DATA. Having more than 50 billion connected devices worldwide, feeding clouds with yottabytes … and being fed !!
A few years ago, there was an Hurricane in the States and all Tesla cars driving in the round of 200 miles were automatically set to low consumption mode, allowing them to drive far from the Hurricane.. What an impressive use of data and connectivity!
There are so many clusters of improvements for industry and so many chances to create new business by data.
So called smart factories are cloud based and fully integrated by horizontal networks (machine layers) and vertical backbone to the top, open to communicate with external stakeholders. What looks so easy and valuable, industry learned could be also expensive and complex.
The approach is the right combination of both evolution and profitability.
In the long term, this is sustainable when we enable competences, new standards and new tools.
Industry is pulling qualification to be more competitive in the new scenario and academic world is not waiting.
There’s a need of a new evolution of operators, technicians, tons of SW experts, managers.
Data are now also used to develop new advanced education paths, at all level.

Let’s learn how to play the game !

SAVE & ACCEPT
Go to Top